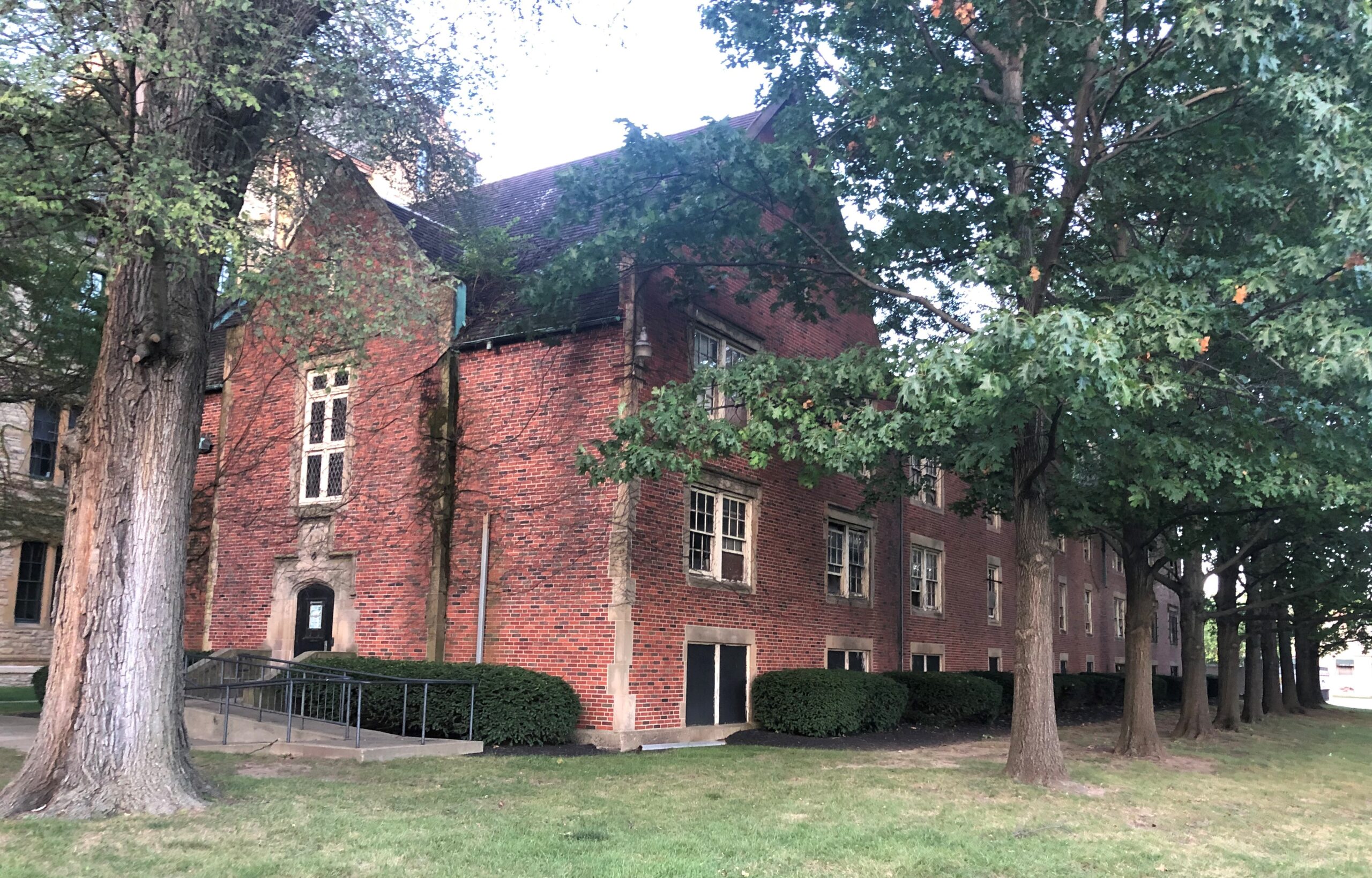 11.1.2021 UPDATE: Columbus City Council has denied funding within the 2021 Capital Improvements Budget for the plan that included demolition of the South Dormitory on the Columbus Public Health campus! Thanks to all who have joined together in advocating for the productive reuse of this building. This is only a reprieve – our work is not done. Columbus Landmarks is committed to helping find a sustainable solution for this significant, public real estate asset. »READ our 10.28.21 appeal to Mayor Ginther The 1935 South Dormitory is part of the 1874 Old Ohio State School for the Blind, 240 Parsons Avenue, that is listed in the National Register of Historic Places. The city’s plan proposes additional parking and drive-thru activity space on the 9-acre Columbus Public Health campus that today includes a 400-car parking deck, long driveways, mature trees and substantial open space.  The Jacobethan Revival style South Dormitory is adaptable, reusable, and 100% preservation-worthy. Together with the North Dormitory (in use and not endangered), it flanks the main building. A row of mature oak trees that line the South Dormitory would also be lost if the building is demolished. Demolition of this building defies all logic in terms of sustainability, housing, health, transportation and community. Columbus Landmarks STRONGLY OPPOSES this shortsighted decision. Please help advocate for a productive new use of this significant landmark to help meet our City’s goals. Don’t delay – the 60-day waiting period for the demolition application will be up in November.

Here’s what you can do:

1. »SIGN our petition … we are still collecting signatures and need yours!

2. ATTEND the meetings: the demolition application is under review by the Near East Area Commission (NEAC). Meeting agendas and details are published »HERE

4. Visit the site at 240 Parsons to see the building’s architecture up close and to understand its context, setting, and relationship to the existing parking and grounds. Note the mature Oak trees lining the South Dorm that will be lost if the building is demolished.

5. Send a LETTER to one of two City Directors involved in this decision:

History of the Old Ohio State School for the Blind

Main Building 1874 context
The Institution for the Blind was built in 1874 and is one of several State institutions of great size and grandeur that sprung up in Columbus post-Civil War as part of Gov. Rutherford B. Hayes’ vast capital building program. Ohio established itself as perhaps the most progressive state in the care and treatment of individuals with disabilities. The other institutions included the Asylum for Deaf and Dumb (one 1868 school building remains and is now Cristo Rey Columbus High School); Asylum for Feeble-minded Youth (demolished; 1857, at 727 East Main Street); and the Asylum for the Insane (demolished; 1877, West Broad Street). The Institution for the Blind accommodated 250 pupils and 65 staff members and was designed by William Tinsley (architect of Cincinnati’s Fountain Square) with Elizabethan and French Second Empire stylistic influences. The Blind School occupied this site until 1953 when a new school was built at Morse and High Streets. When the Blind School moved, the Ohio Department of Highway Safety took over the building for needed office space. In
2001, Columbus Public Health moved into the first two floors of the building following a $22.5 million renovation.

North and South Dormitories 1935
The two fireproof dormitory buildings were built in 1935 to flank the main building, and completed the Blind School facilities. Previously, students were housed on the third and fourth floors of the main building, which was deemed an extreme fire hazard for blind children and with no fire escapes. The two new dorms were designed to ensure the health and safety of the students. The North Dormitory was for boys; the South for girls; and each accommodated 132 students and four matrons. John Schooley, Sr. was State Architect at the time of the construction of the dorms and designed these in a lovely Jacobethan Revival Style with materials and details that cannot be matched or afforded today.  The dormitories reflect the 20th century “Cottage Plan" of asylum design constructed to better segregate sexes than the former 19th century
“Kirkbride Plan" with everyone housed in one building.

Works Progress Administration (WPA) Scale Model Project
The Ohio School for the Blind was part of a successful WPA scale model project that became a pilot project of the American Foundation for the Blind. The project encouraged model building and “talking models” for the benefit of the students, who would run their hands over the models to learn  Interest in the model project was so widespread that in November 1938, Eleanor Roosevelt visited the Ohio School for the Blind. The image shows the model builder fixing the North Dormitory in place. 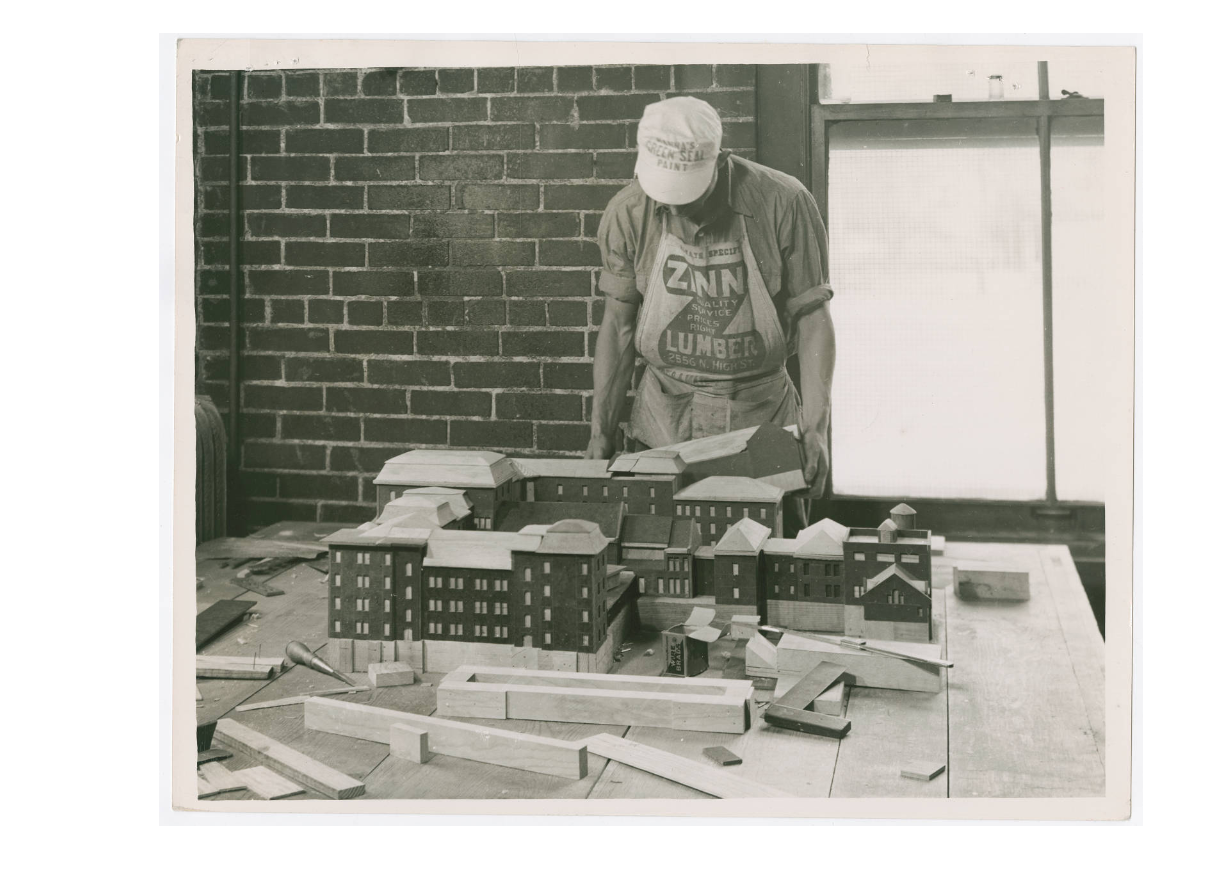 Please preserve this building. How often is there a parking shortage at the health department? Maybe during Hot Times? And that’s mostly neighbors.

Please preserve and reuse this building.

We need to preserve our some of our past . We need to find a logical “new” use for the relic of the past

There really are so very few genuinely beautiful buildings on that campus. Preserving the few there are seems vital to the entire community.

This building needs to be saved. It has history and character unlike many that are quickly thrown up now.

Please preserve and reuse this building.

I support preserving the building.
I think my first Driver’s License (Learner’s Permit) exam was in this building.

This is a beautiful building that could be preserved and used and there is plenty of space for parking elsewhere. Please don’t tear down a historical landmark unnecessarily.

Please preserve what is left of our city’s historical footprint. We cannot lose another historic structure over parking and deferred maintenance.

Please preserve this building. We have precious few historic buildings in this city. Parking is not an issue here. Even during hot times there is always plenty of space. Let’s not pretend it’s for parking.

Kudos to Becky West for her thoughtful work of advocacy that includes the history of this particular building and why its preservation is so important. The work that Landmarks does is indispensable and I can’t imagine not being a member of such a significant organization in the life of the community.

I recently moved to Columbus in May of this year, from Chicago. Chicago has no shortage of great historic buildings but they’ve made their mistakes in unnecessary demo. Don’t make the same mistake Columbus, especially not for a parking lot! There is a historian (also in Chicago) Geoffrey Baer who does architectural tours for PBS specials and he always mentions the WPA work. It’s always a treat to see. Perhaps the city can find a way to highlight this WPA treasure in some way that will provide a bit of a return so as to cover any needed restoration work. There are so many opportunities here with this lovely building. It really must be saved !

Candidly, the City chose the wrong building to tear down. The Empire main building is so non redeeming.
Redevelop the campus in the style of the dormitory

I continue to wonder what is the world does my hometown have against architecturally and historically significant older buildings? The East Coast and Europe rave about them and Columbus Ohio razes them.
AS

I know it’s not over, but it is fantastic news and I will continue to advocate by e-mailing or writing letters to City officials especially the ones I just voted for today!

I watched in horror as the Pavey project apt building (N High St) redefined a neighborhood which no one in the area wanted. Buildings like this dormitory are underpinnings, icons that MEAN something to the neighborhood and create loving and meaningful identification with a place. It needs to be repurposed. It deserves more respect as do the wishes of us who live in the area.

To not find a new use for this building would be shameful. Columbus is quickly losing its architectural history.

Please save this beautiful building. I used to live in Merion Village and loved driving by it. So much history and beauty is not worth a parking lot. Joni Mitchell’s song anyone?