Six outstanding individuals and organizations who have advanced historic preservation in Columbus through action! 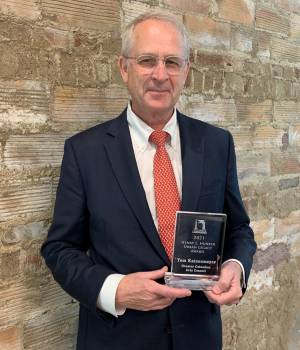 Henry L Hunker Urban Legacy Award
Henry L. Hunker was the second President of Columbus Landmarks and Professor of Geography at Ohio State. Henry understood that what we have today is the result of the physical, economic, social, creative  and cultural forces that combine to shape a city over time. He was known to be a wonderful storyteller and architectural adventurer. This award honors those who love and appreciate the urban environment, in its broadest definition, and work tirelessly to improve it.

WINNER
Tom Katzenmeyer, Greater Columbus Arts Council As CEO of the Greater Columbus Arts Council (GCAC), Tom is a tireless arts advocate who is transforming our city through hard work and creative collaborations. Tom and his team played a critical role during the COVID-19 pandemic securing support and resources for individual artists and organizations like ours. GCAC joined forces with CAPA to create #ArtUnitesCbus, an initiative to employ local artists to paint vibrant murals on the plywood installed over windows downtown last summer. The murals were then preserved and exhibited throughout the city to spark more community dialogue about racial equity. Just prior to the pandemic, GCAC moved its offices into the historic Winders Motor Sales building at 182 E. Long St. that was rehabilitated utilizing historic tax credits. Further securing Tom’s legacy status, GCAC established an artist-in-residency program in partnership with the Columbus Museum of Art at the former home of the late artist Aminah Robinson. It is obvious that like Henry Hunker, Tom Katzenmeyer loves and appreciates our city and is working tirelessly to improve it for everyone.

»INVEST in artists and arts programming with a gift to GCAC in honor of Tom Katzenmeyer! 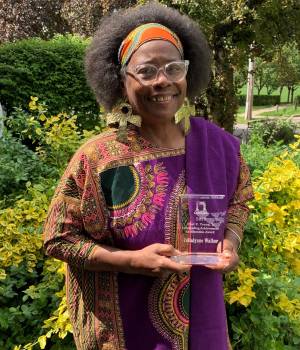 Paul E. Young was a founding Trustee of Columbus Landmarks and longtime Professor of Architecture at Ohio State. Paul fostered love of the city and appreciation for its layers and detail in his students. The Award in his memory honors those who lead discovery of a new dimension of the city’s architectural and historical legacy.

Julialynne Walker, Bronzeville Growers Market Julialynne is dedicated to sharing her deep knowledge and world experience with the local community after having spent several decades away from Columbus working in social development in Africa. As founder of the Bronzeville Growers Market and Agricademy in the King-Lincoln/Bronzeville neighborhood, Julialynne is helping to connect fresh food and healthy living with community and backyard gardening programs to strengthen the health and well-being of the neighborhood. While serving on Columbus Landmarks’ Board of Trustees, Julialynne worked with research teams to produce the African American Settlements Report of Columbus,  and in 2020, she led a series of virtual educational programs on Sundown Towns in Ohio exploring discriminatory restrictions and bans against people of color that persisted until the 1970s. Julialynne is an active Columbus Landmarks volunteer, currently serving on our Membership Committee, and she is President of the Franklin Park Civic Association and serves on the Advisory Council of the Columbus Africentric K-12 Early College. 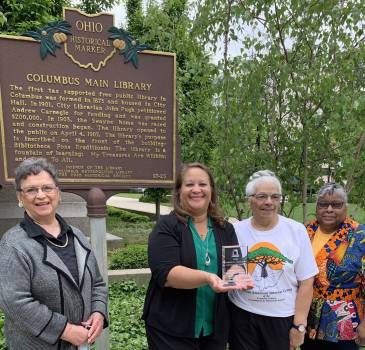 Frederick J. Holdridge was an honorary Columbus Landmarks trustee and German Village activist extraordinaire.  The Award recognizes people who have significantly fostered the cause of historic preservation and like Fred, make it meaningful and for all to enjoy.

Franklin County Genealogical & Historical Society, African American Interest Group – Since 1970, the Franklin County Genealogical & Historical Society (FCGHS) has been assisting researchers throughout central Ohio with a deep and talented volunteer network. FCGHS operates from the Main Library, in perfect proximity and  association with the resources of Columbus Metropolitan Library’s Local History & Genealogy Department. The African American Interest Group (AAIG) began in 1992 to address challenges unique to researchers within the African American community.  The AAIG is creative and adept at navigating non-traditional and varied research sources including church and school records, oral histories, military records and more. Under the leadership of Stephanie Sparrow-Hughes, AAIG Chair and FCGHS President-Elect, the group hosts conferences that address inequality with enhanced research methods and knowledge. The FCGHS and its determined researchers, including Reita Smith, Nettie Ferguson and Sandra Jamison, worked with Columbus Landmarks to produce the African American Settlements and Communities Report, and they continue to document the overlooked and yet-to-be discovered stories of Columbus that are critical to the work of historic preservation.

»BECOME A MEMBER of the Franklin Co. Genealogical Society (just $20) to support the work of the AAIG! 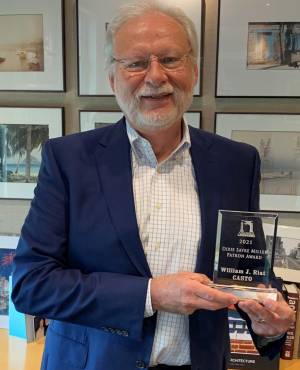 WINNER
William J. Riat, CASTO Bill Riat is an experienced developer with a deep appreciation for historic architecture. A lifelong resident of Columbus, Bill holds a degree in architecture from Ohio State, and brings an eye for design excellence to urban development. Bill previously served on Columbus Landmarks’ Board of Trustees and he has been a dedicated and generous supporter of our work. Bill is credited with saving and redeveloping the 1921 Julian & Kokegne Company shoe factory on the corner of Front & Main downtown into a stunning downtown residential space. Bill is also credited with saving and redeveloping five historic mansions on East Broad Street (between Sherman and Wilson Avenues); 8 East Broad Street (the Frank Packard-designed Capitol Trust Building); and the former South High School/Barrett Middle School. He was also a partner in the restoration of the LeVeque Tower. Bill and his team at Casto are currently working on the adaptive reuse of the historic Lubal Manufacturing Co. in Franklinton as well as a partner in the redevelopment of the historic Ford Motor Assembly Plant (former Kroger Bakery) site, both previously featured on our Most Endangered Sites lists. We are grateful that Bill values historic preservation and that he utilizes his experience and influence to create vibrancy and an enduring legacy for our city. 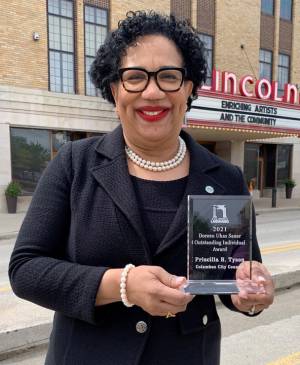 Doreen Uhas Sauer Outstanding Individual Award
Doreen Uhas Sauer is a lifelong educator, and perennially popular tour guide, author and community leader. She is a past Columbus Landmarks President and continues in service as Education Coordinator. The award in her honor recognizes leadership and service that goes above and beyond.

WINNER
Columbus City Council Member Priscilla Tyson – Throughout her 14-year City Council tenure, Priscilla Tyson has personified leadership and dedication to public service above and beyond the call of duty. When she retires at year-end, she will be the longest-serving woman ever on Columbus City Council, and her advocacy for Black girls and young women will be an important part of her legacy. A lifelong Columbus resident and true blue East Sider, Councilmember Tyson has kept the health and well-being of Columbus neighborhoods and opportunities for all residents at the heart of her work. She was integral in supporting the preservation of the two remaining Poindexter Village buildings that will become the Poindexter Village Museum and Cultural Center. During the City Council summer recess, Councilmember Tyson would join our Monday night Art Walks & Landmark Talks, not to shake hands or be recognized as a long-serving Greater Columbus Arts Council Board Member, but to participate as a citizen who appreciates the impact of public art, landscapes and architecture on the quality of all of our lives. In every action and interaction, Councilmember Tyson was respectful of our historic past while working for a better future. We wish her well in her retirement.

»READ THE REPORT on the Quality of Life of Black Girls in Columbus to honor Councilmember Priscilla Tyson! 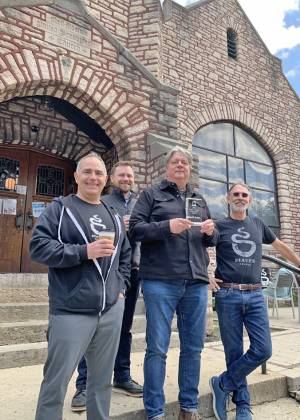 James L. Keyes President’s Award
The James L. Keyes President’s Award is named for the founding President of Columbus Landmarks and a lifelong believer in the importance of historic preservation. Jim was there 44 years ago in the battle to save the remaining Union Station Arch and move it twice, and to create this organization dedicated to historic preservation and design excellence.

WINNER
Stauf’s Coffee Roasters In 1988, Stauf’s Coffee Roasters began offering specialty coffee in Columbus and they distinguished their brand by hand-roasting coffee daily. Stauf’s is Columbus’ first micro-roaster, opening their first store in a historic commercial building on Grandview Avenue. Today with six locations in historic neighborhoods that smell as good as they look, Stauf’s has proven that preservation and coffee are quite complementary. In 2019, Stauf’s pursued the 1880 former Neil Avenue United Presbyterian Church in Dennison Place for adaptive reuse. The thoughtful rehabilitation repurposed stained glass windows, pews and sanctuary doors to create a stunning, light-filled design. Stauf’s is committed to good coffee and to Columbus and its historic neighborhoods … a trifecta in our book.

»VISIT Stauf’s at 1334 Neil Ave. for the coffee AND to be inspired by the excellent adaptive reuse of a historic church building!