It’s not every day we get to move history, but we feel lucky the opportunity presented itself in regard to distinctive masonry from the old Ohio Penitentiary, and fortunate that we have reliable partners willing to help when it comes to serious heavy lifting. 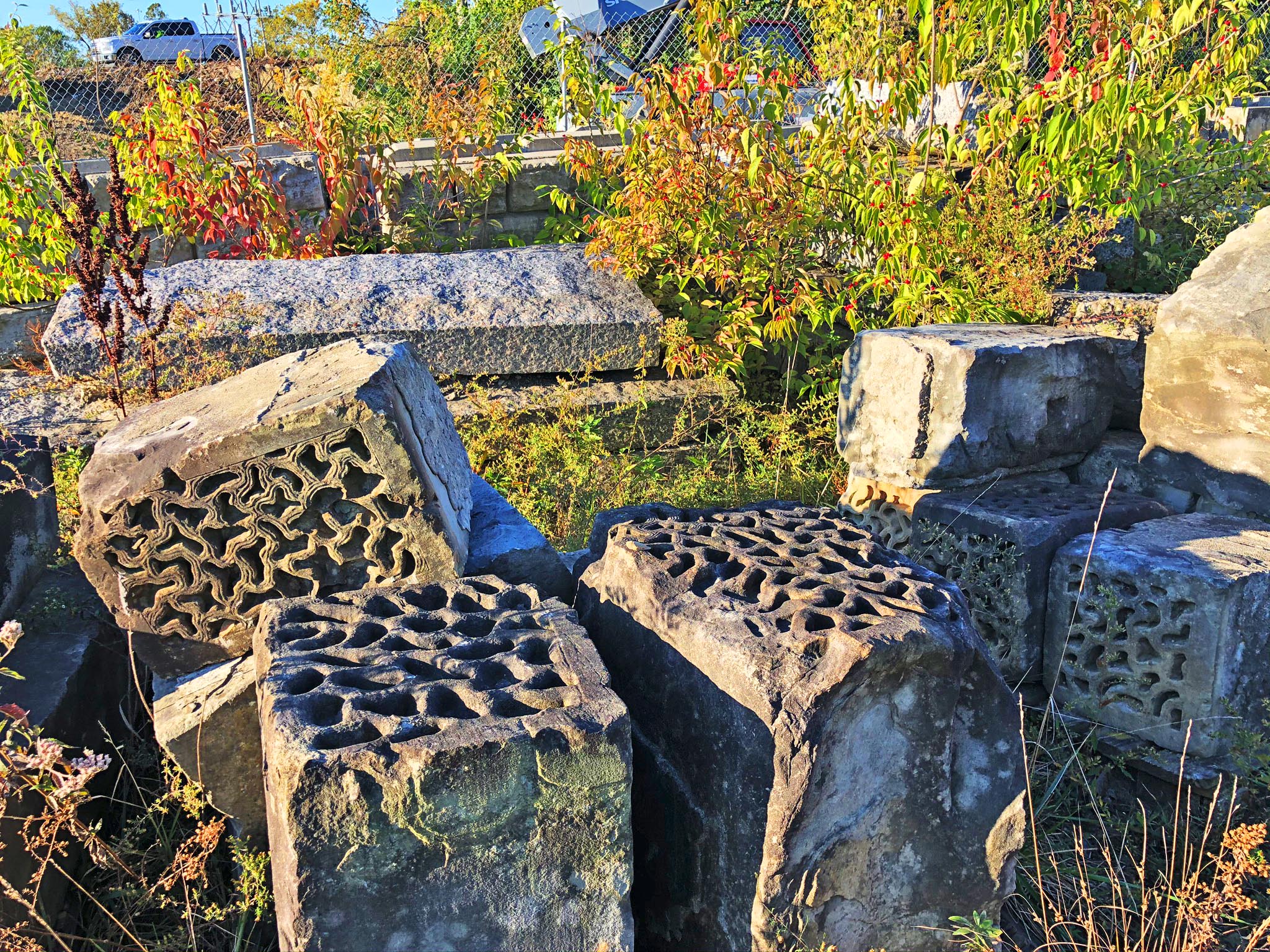 We received confirmation in September that stones that had been salvaged 22 years ago when the Pen was demolished were laying on the edge of the future site of the new Crew Stadium. Bob Loversidge, President and CEO of Schooley Caldwell and founding trustee of Columbus Landmarks, helped identify the stones from the “newer" upper parts of the Spring Street facade and the tower at the corner of Neil and Spring. Included are two date stones, 1876 (pictured) and 1878 (cloverleaf); a cornerstone identifying J.C. Johnson as the architect; caps, domes and lintels; and several vermiculate stone quoins (pictured at right and below.) Vermiculate masonry resembles a worm-like pattern that gives stone a rusticated appearance providing contrast to finer finishes. John Carlton Johnson of Fremont, Ohio, was an established designer of public buildings in NW Ohio, including the Defiance County Courthouse.

The owner of the land and the stones, Nationwide Realty Investors (NRI), agreed to transfer ownership of these artifacts to Columbus Landmarks. But we had to move them quickly – in the days before the land was transferred to the Legends development team – and these “stones" would be more aptly described as “boulders." Brad DeHays of Connect Real Estate, who is rehabilitating the neighboring Municipal Light Plant, came to the rescue with his construction team and equipment to move the stones and store them while plans for their reuse are finalized. These stones are extra special in character, detail and history, and we hope they will be reused in a creative way so that the public can enjoy them and learn from them for another century.

Hurrah on saving the stones! I am just visualizing them in a park somewhere near the old Pen site…maybe even call it Pen Park?? Maybe that is too much, but it would be good to incorporate a covered display area about the history of the Pen and incorporate the stones in a pleasant place to sit and learn. Sounds like a good architectural student project.
At any rate, great job on saving the stones and their history. Many thanks to all the partners for their help.

When the area was in early development these stones were moved several times. At one time they were in a fenced-in area near the current site of Huntington Park, east of the Buggyworks Building. Later, they had been moved to another field along the west side of either Cozzins or Hanover. I called the Ohio Historical Society and left a message with then-Executive Director Bill Laidlaw’s secretary. Unfortunately, nothing was ever done then, so it’s good to see the stones have been preserved now. Somewhere, in a box in storage, I have photos of the stones at both locations.