4.17.18 UPDATE: The Columbus City Schools Board of Education voted unanimously tonight to move forward with the sale of Indianola Middle School to The Ohio State University. A few adjustments to the Memorandum of Understanding were made and agreed upon naming CCS preferred K-12 educational partner.  Many thanks to all the advocates who came to the meeting tonight … and waited 2.5 hrs to be heard!
Columbus City Schools Board of Education will meet on Tuesday, April 17 at 5:30 p.m. to vote on an update and resolution of the intent to sell Indianola Middle School to 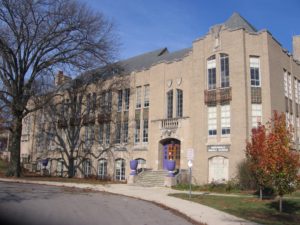 The Ohio State University. At its September 2017 meeting, the Board of Education voted to proceed with the sale. Seven months later and going on eight years of vacancy, the Board of Education will consider a new Memorandum of Understanding that outlines continued involvement of Columbus City Schools in the creation, development and operation of an educational opportunity on the site.

Columbus Landmarks Foundation will be there to urge the Columbus Board of Education to proceed with the direct sale of Indianola Junior High School and its grounds, located at 420 East 19th Avenue, to The Ohio State University. We know that vacancy and unconditioned space is not good for the structure and increases the challenge of rehabilitation.

We strongly believe this arrangement already agreed upon will provide this important architectural, historical and cultural landmark not only long-term reuse, but also the greatest potential for positive impact on the immediate and surrounding neighborhoods. If you wish to speak to this agenda item at Tuesday’s meeting, call the Office of Customer Relations at 614-365-8888 or email cpscustomerrelations@columbus.k12.oh.us and include your name and address, group affiliation, and topic to be discussed. »view agenda

Indianola Junior High School opened in 1929 and was designed by Howard Dwight Smith, who was architect for the Columbus Board of Education at the time. Smith is notable for having designed Ohio Stadium, as well as other significant Columbus landmarks including City Hall. Indianola Junior High represents a creative merger of architectural styles: Gothic Revival and Art Deco. The building’s exterior is adorned with Native American and woodland themed ornamentation. Designed to model a high school, Indianola’s innovations included industrial arts and home economics classrooms, a model apartment for student design, and a wood paneled library with a stone fireplace. The school sits on the former Indianola Amusement Park grounds and is listed in both the City of Columbus Historic Register and the National Register of Historic Places. In short, THIS PLACE MATTERS.

Since 2014, Indianola Jr. High has been featured on Columbus Landmarks’ Most Endangered Buildings List. Columbus Landmarks removed the building from its 2017 list when news of the cooperative agreement between Columbus City Schools and Ohio State became public. Among all of Ohio school districts, Columbus City Schools has been the model for reusing and sensitively rehabilitating and adding on to historic school buildings. We hope the Board of Education will continue this legacy by proceeding as planned with the direct sale to Ohio State, ensuring that Indianola Jr. High School will be innovative and impactful again soon.

As a long-termmmeber of Columbus Landmarks Foundation and as an artist, Professor Emeritus in the Department of Art, OSU, and a citizen passionate about retaining / re-puposing historical structures in our city, I write to voice full support for the the direct sale of Indianola Junior High School and its grounds, located at 420 East 19th Avenue, to The Ohio State University.

Preserve the building. I do hope that if Ohio State University buys the building, they will preserve it and not demolish it.
Sara Garnes

we need to save this building so we can pass it on to further ohios.

I want to own this property I don’t want it to be demolished hopefully in the future I will buy the property and turn it to my home.

pls save this property for me cuz I want buy it in the future.