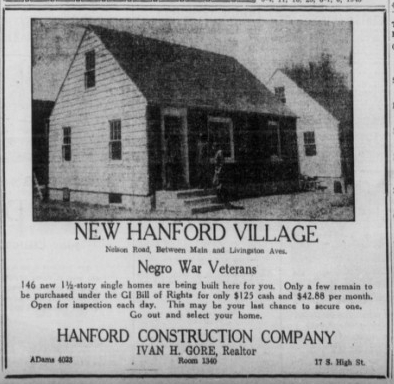 The Hanford Village George Washington Carver Addition Historic District has been listed in the National Register of Historic Places. The National Register is the official list of properties recognized by the federal government as worthy of preservation for their local, state, or national significance in American history, architecture, archaeology, engineering, or culture.

Columbus Landmarks was awarded a Certified Local Government Grant from the Ohio Historic Preservation Office to prepare this nomination.  Incorporated as The Village of Hanford in 1909 and developed in 1946 and marketed to African American veterans, Hanford Village is a cohesive neighborhood of Cape Cod style homes. The development provided the opportunity to buy newly constructed, quality housing for middle class families. In the mid-1960s, Interstate 70 cut through the heart of the community, yet what remains of Hanford Village today is a thriving and close-knit neighborhood. The original boundaries ran between Main Street and Livingston Avenue; Lilley Avenue and Alum Creek. In 2011, Columbus Landmarks’ AmeriCorps member documented 150 Mid-Century Modern buildings, over half of which were located in Hanford Village.

[…] The Ghost Neighborhoods project is just beginning in Columbus, he said. The team begins with the Hanford Village neighborhood on the east side, which was split up in the mid-1960s to build I-70 through town. That Neighborhood is on the National Register of Historic Places. […]