Applications for the 2021 Ed Lentz Prize are now open!

The Ed Lentz Prize is a $500 cash prize awarded annually to the individual who submits the best presentation for providing a better understanding of the history, architecture and/or importance of historic preservation in central Ohio. The prize is named in honor of Ed Lentz, who is Columbus Landmarks Director Emeritus.

Entries (writing, presentation, film, other) must have been created within the past three years and should document, evoke, interpret, analyze or capture the importance of place and its preservation. Applications for the 2021 prize are due Friday, January 15, 2021. The winner will be announced on February 19, 2021.The winning entry will be selected by a three person jury made up by Alison Circle, Chief Customer Experience Officer, Columbus Metropolitan Library; Matthew Leasure, PLA, AICP, LEED AP and Principal, Designing Local; and Bettye Stull, Independent Curator.

The annual prize is made possible via the Columbus Landmarks Foundation Ed Lentz Prize Endowment Fund  at The Columbus Foundation. Not only does the prize honor Ed’s important legacy in perpetuity, but it provides a platform for those whose creative talents and passion for the past, present and future will shape our city.

Ed previously served as the organization's Executive Director twice – once in the 1980s and again from 2013-2017. Ed is also well known for teaching, writing and exploring the history of central Ohio. He is the author of several books, including Columbus – The Story of a City (2003), and Historic Columbus (2012).

The very first Ed Lentz Prize was awarded in 2020 to Lou Varga who produced a documentary of the restoration of Rock Mill in Lancaster, Ohio. ROCK MILL Saving An Original explores how the utilitarian structure originally built in 1824 on the precipice of a cliff in the frontier was faithfully restored to remain standing 196+ years later and reminds us how man’s ingenuity brings nature and commerce together for a community benefit. »WATCH ON WOSU 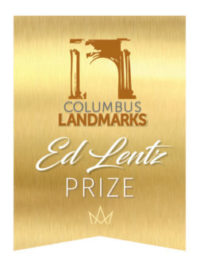