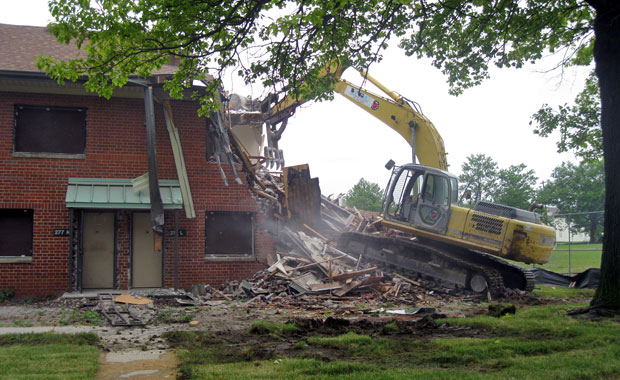 The story of Poindexter Village continues to unfold. Poindexter Village was named for the Rev. James Preston Poindexter (1819-1907), an abolitionist, civil rights advocate, social justice pioneer, politician, and Baptist minister. Operated by the Columbus Metropolitan Housing Authority, Poindexter Village opened in 1940 as one of the first public housing projects in America. As demolition of much of the Village proceeded in 2013, an Expert Committee was appointed to evaluate the possibility of saving 10 buildings on the site. Cathy D. Nelson represented Columbus Landmarks on that committee.

The Committee presented its Report on June 27, 2013, recommending the retention and adaptive reuse of the 10 buildings. The Columbus Metropolitan Housing Authority responded to the Report of the Expert Committee on July 19, 2013. The Response reported the view of the Authority that, for economic reasons, the decision had been made to save only two buildings while also remaining committed to several other projects to mitigate the loss of Poindexter Village.

Do you have anything available

is there anything available ?

I am looking for low income subsidized property to move in asap. Please contact me with more detail. Thanks!

Hi! I’m the Community Health Coordinator with YMCA of Central Ohio. We OFTEN need to house families that are expecting &/or have infants. Can you please send me information on how to get into these beautiful homes? Thanks!!

Hi Nadine! Susan Keeny who directs our Home Preservation Program will be contacting you to learn more about your needs. Thanks – Becky West

Hi, you forgot to mention who was the man who founded this housing!

I meant, you forgot to mention that James Preston Poindexter was the man who founded this housing development!

Thanks for pointing this out, April … fixed! Poindexter Village opened in 1940 and was named for Rev. Poindexter, who passed in 1907.