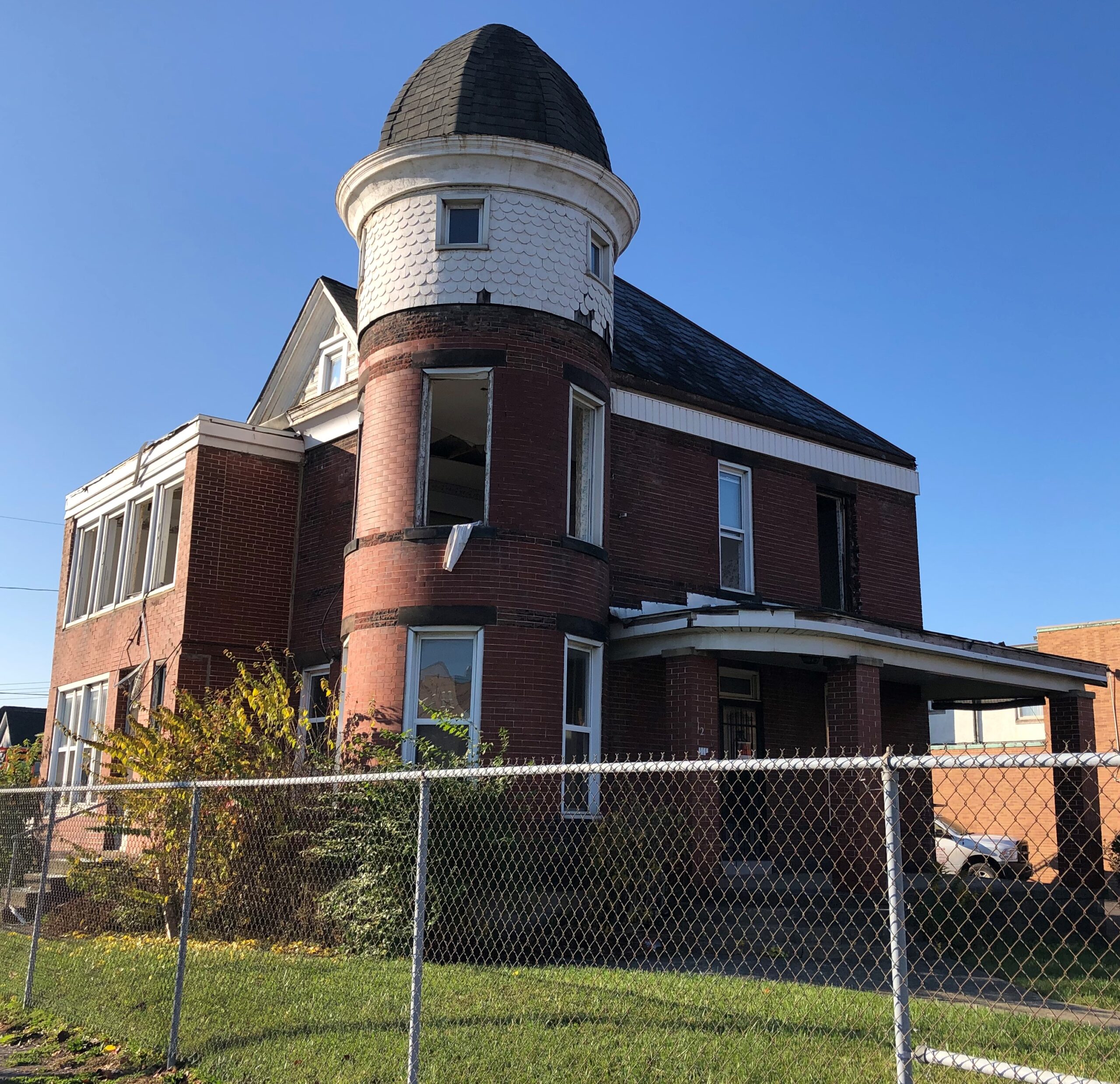 This c1900 Queen Anne style house at 1235 W. Broad Street, the last of its kind in Franklinton, was demolished Nov. 12. Columbus Landmarks made an offer to purchase the building, utilizing our new Endangered Properties Fund. However, a representative of the West Broad Street Missionary Chapel Board (owners of the property) replied via email that they were proceeding with demolition. At the Franklinton Area Commission meeting last month, church representatives shared there is no intended use for the cleared site, but that it may be used for overflow parking or outdoor services. We are frustrated by the church's decision to dispose of an asset that if rehabilitated had great potential to serve their long-term interests and those of the neighborhood. The church donated the property to the Columbus Division of Fire for training exercises, hence the holes in the roof and broken windows. Columbus Landmarks will work to establish a relationship with the Division of Fire to avoid future destruction of property with historical significance. >>READ 11/4/2020 COLUMBUS DISPATCH STORY

Shame on both entities !!!!! I am a retired CFD firefighter…I know there is a need for training, but that is a shame. That chapel should be ashamed as well…..another landmark gone for a STUPID parking lot. What other properties do they own ??? Thanks, Becky.

Columbus has lost so much character and history over the last 50 years. This is an unfortunate outcome.
Becky, appreciate your passion and drive to preserve/rescue what remains of Columbus’s historic architectural treasures.

What a tragedy. How do we continue to be a throw away city. We can never regain that loss. How do we not respect what was so revered ? I am sad to say our city cares nothing about history.

That is sad news.

What a shame. I started taking pictures of old Columbus buildings in 1991 because of this reason. I’m glad I did because many are now gone along with their history.

When I was growing up my uncle let the fire department do a practice burn to the bank barn at the adjacent farm that we would play in when I was a kid. That, among other things, lead me to a career in historic preservation. This kind of wanton destruction makes me want to do even more to preserve what remains. I’M FIRED UP!

This is sad to hear. Thank you Columbus Landmarks for fighting the good fight, for speaking up and advocating for the preservation of our shared history. It’s important and invaluable work. Good speed friends.

The development owner of an historic property on W. Broad Street, Hilltop, also invited the Fire Department to conduct exercises in the building before it was demolished. We were in Court at the time, and I believe the goal of the developer was to ensure that the property would not be preserved under any circumstances. We reached out to the Fire Department, and they had no idea.

We need historic review built into our muni. code, where no demolition proceeds until a review has been conducted. Other cities have successfully used such provisions as a springboard for economic development and responsible reuse. Another problem is the city zoning, which would allow this parcel to be used as a parking lot. The muni. changes to zoning, which as far as I can tell occurred under the previous administration and were demolition friendly, are particularly egregious and ahistorical.

Once again we see the unfortunate results of my ” tear down home town” attitude.
Columbus has sustained incredible losses…since most people here apparently do not understand history or preservation, I am so grateful that Landmarks does . Somehow, we MUST do a better job of education.
Thanks Becky, for continuing to engage in what be must be an enormously frustrating fight.