Every year Columbus Landmarks recognizes distinguished achievement in historic preservation and community development. We are honored to recognize the following individuals and groups for their efforts. 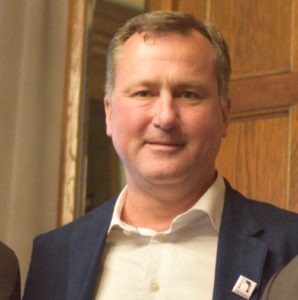 The Award is named for Dixie Sayre Miller, who was a dedicated trustee, a great friend, and a supporter of Columbus Landmarks from our organization’s earliest days. Dixie’s passion for preservation was matched by her generosity, and we were overwhelmed to learn in 2009 that we had been designated a beneficiary of her estate. This remains the largest single gift we have received to date and allowed us to establish at The Columbus Foundation. The Dixie Sayre Miller Patron Award recognizes an institution or individual whose commitment and support reaches beyond the ordinary in the cause of historic preservation and improvement of the built environment.

It is an honor to present this year’s award to Jeff Edwards. Jeff is Chairman, CEO and President of Installed Building Products, as well as President of the Edwards Companies, and a member of the Columbus Partnership. He is a past Columbus Landmarks trustee and together with his wife, Lisa, a generous annual supporter. In the late 1980s/early 1990s, Jeff spearheaded the $55 million redevelopment of the Brewery District that revitalized this significant, historic neighborhood and re-established its identity. In the last decade, Jeff brought his creative vision downtown where he has thoughtfully transformed a swath of surface parking lots along Gay and Long streets into the incredibly successful and impeccably designed Neighborhood Launch development, including rehabilitation and adaptive reuse of the historic Welsh Church. Most recently, at the SW corner of Gay and High Streets, Jeff has rehabilitated the historic Citizens Bank building into 63 apartments with a stunning lobby bar that is open to the public, and a stylish home for Veritas Restaurant. Across the street from this project, construction is underway on a new mixed-use development that infills a large and important vacant parcel on High Street. It is clear that Jeff’s personal commitment to the built environment reaches beyond the ordinary and sets a gold standard in Columbus. 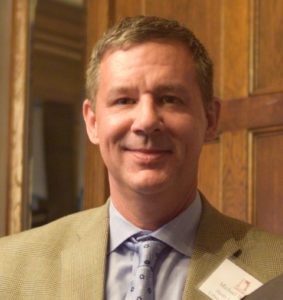 Henry L Hunker Urban Legacy Award – Michael A. Wilkos
The Award was established in honor of Henry L. Hunker, the second President of Columbus Landmarks and Professor of Geography at The Ohio State University. Henry had a special understanding of the urban environment. He understood that what we have today is the result of the physical, economic, social and cultural forces that have shaped our city. He was known to be a passionate urban story teller and architectural adventurer. This award honors those who love and appreciate the urban environment, in its broadest definition, and work tirelessly to improve it.

This year the Henry L. Hunker Urban Legacy Award is presented to Michael Wilkos. Michael is Senior Vice President of Community Impact at United Way, developing effective approaches to fighting poverty. Michael previously served as Director of Community Research at The Columbus Foundation and is also a past Columbus Landmarks trustee and a generous supporter. Michael may best be known for his commitment to the Weinland Park neighborhood, where he lives. For 120 years, the neighborhood has had a proud tradition of diversity. After the 1950s, however, the neighborhood struggled with high crime, unemployment, and concentrated poverty, and its population dwindled by 50 percent by the year 2000. Today, Weinland Park is a national model for inclusive, community-based revitalization, and Michael is credited with managing $9 million in competitive grant-making that has supported this remarkable turnaround. The Weinland Park initiative has helped reduce crime rates, improved the built environment, and increased opportunities for its residents. Oh, and preservation? That, too – the Weinland Park Collaborative has repaired and renovated hundreds of housing units, including the 23 buildings now known as Grant Commons. Despite designation in the National Register of Historic Places, these buildings were threatened with demolition due to a long period of neglect. Michael led a Weinland Park design tour for Columbus Landmarks last fall and the restored neighborhood vibrancy is evident and exhilarating. So is Michael’s fundamental belief in and commitment to “design for all.” We are honored to present Michael Wilkos, who earned degrees in Geography and Urban Planning, with the Henry Hunker Award. 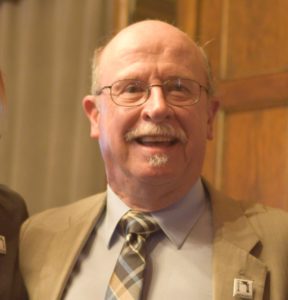 The James L. Keyes President’s Award is selected annually by the President of the Columbus Landmarks Board to honor an individual, neighborhood, community group or business for an initiative that has significantly advanced the cause of historic preservation or improved the built environment, thereby the quality of life in Columbus and central Ohio. The Award is named for the founding President of our Board and a lifelong believer in the importance of historic preservation. Jim Keyes was there 41 years ago with Bob Loversidge, Nancy Recchie, Jeff Darbee, Franklin Conaway and others in the battle to save the remaining Union Station Arch, and to create this organization dedicated to historic preservation and new design excellence.

This year’s President’s Award recognizes Randy Black, who is the recently retired Historic Preservation Officer for the City of Columbus. His 15 years in the post and more than 30 years with the City have earned him tremendous respect and recognition among development partners. Randy is credited with a proactive approach to preservation, helping broker deals for buildings like the Municipal Light Plant – thought to be too far gone and not reusable to many – with the right development partner to make transformation happen. In his tenure, Randy presided over Columbus’ Historic Resources Commission and Districts, attending countless after-hours meetings to ensure the fabric of our historic neighborhoods remains intact for the benefit of future generations. He is a thoughtful and approachable advisor to Columbus residents, businesses, contractors, real estate agents and property owners regarding best preservation practices. A true music aficionado, Randy may not get much rest in retirement as he is committed to bringing jazz back to the Macon Hotel in the King-Lincoln District. 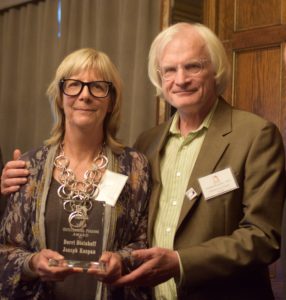 The outstanding person award is given to an individual or individuals who have enhanced the cause of historic preservation and improved the built environment, thereby enhancing the quality of life in our community.

This year the Award is presented to Dorri Steinhoff and Joe Kuspan. Dorri and Joe are credited with saving a significant residential property featured on our first Most Endangered Buildings List. Glenbrow, also known as the Gunning House, is a mid-20th century, Organic Modernist house that embodies Frank Lloyd Wright’s Usonian principles of architecture as interpreted by Wright disciples, Tony Smith, Laurence Cuneo and Ted Van Fossen. Built in 1940 with lime and sandstone that was quarried on-site, and board and batten cypress horizontal siding, the house sat vacant, open to the elements for many years with only minimal maintenance since 2006. Many people, some preservationists included, believed it to be too far gone. But the site, tucked away off E. Broad Street near Reynoldsburg, highlights to perfection the integral relationship between landscape and architecture. Built into a hillside on a wooded ravine overlooking a bedrock bottom creek, floor to ceiling windows take full advantage of dramatic views. David Vottero, Director of Architectural Design at Schooley Caldwell and Columbus Landmarks trustee, advocated for the property for many years and helped envision the possibilities. Dorri and Joe, who is an architect, shared that vision and applied their talent and fortitude to a three-year transformation taking the house from ruin to architectural gem. They did much of the hard work themselves.

Joe and Dorri are not new to home renovation, having previously restored the Noverre Musson House in Bexley, but what is remarkable was their willingness to do it again! We are so glad they did. They graciously gave a lecture and hosted a tour for us last fall. We frequently hear that buildings on the endangered list are too gone, that it can’t be done – Dorri and Joe are proof otherwise. 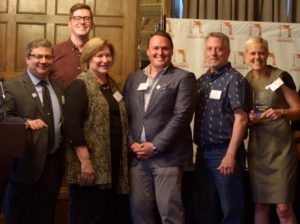 The Award is named for Fred Holdridge, Columbus Landmarks Foundation Honorary Trustee and neighborhood activist extraordinaire. The Award recognizes a neighborhood, community group or organization that has significantly fostered the cause of historic preservation or improved the built environment, thereby enhancing the quality of life in Columbus and central Ohio.

This year the Award is presented to German Village Society. In 1960, a small group of dedicated, preservation-minded people met to explore the possibility of forming an association to help save the neighborhood from decline. Community activist Frank Fetch got busy and recruited 183 people to charter the German Village Society. The momentum has been unrelenting and fast forward 58 years, these Caretakers of a Legacy remain dedicated to retaining the character and distinction of the past, while creating a thriving and contemporary community.

Under the leadership of Executive Director Shiloh Todorov, the German Village Sociey sets a high bar for neighborhood advocacy and support. Last year, and with tremendous cooperation by both parties, the Society reached an agreement with Columbia Gas to position meters out of public view when possible, retaining the character and aesthetic value of the buildings. The Society Board also approved a plan encouraging advocacy beyond their borders. We can assure you there is strength in numbers in preservation battles, and we have been bolstered by joining forces twice recently in the Brewery District, fighting for the Maennerchor building and the South High Antique Mall. The Society celebrated the 150th Anniversary of Schiller Park last year with the publication of a beautiful coffee table book. And in addition to their well-developed heritage tours, German Village Society just unveiled an immersive interpretive trail called “The Brickline: An Urban Historic Discovery” with recurring themes including German settlement, immigration and culture; the groundbreaking historic preservation movement; the architecture, landscape and physical context of the neighborhood; German Village parks and gardens; and LGBTQ residents as community visionaries. Fred Holdridge was known for his generosity, commitment and his fun-loving spirit – German Village Society carries forth these values. 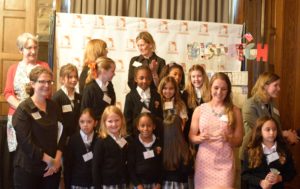 Paul E. Young Outstanding Achievement in Education Award – Columbus School For Girls 3rd Grade Landmarks & Neighborhoods Team
This award is named in honor of Paul E. Young, a founding Trustee of Columbus Landmarks Foundation and longtime Professor of Architecture at The Ohio State University. He was, in the words of one his friends, he “fostered a love of the city’s architectural details in all who met him.” The Award honors students or educators for a program or project that has fostered discovery of a new dimension of the city’s architectural and historical legacy, while promoting the cause of historic preservation or improving the built environment.

The Award is presented to Columbus School for Girls 3rd Grade Landmarks & Neighborhoods Project Team. Teachers Nicole Bondi and Amanda Bunten planned this four-month integrated Social Studies project. The students learned how to research Columbus landmark buildings, went on field trips around the city, and developed scripts. With their art teacher, Abigail Blosser, they created building replicas, and under Karen Scranton, the Innovation Lab teacher, they created QR codes connecting their landmark to electronic resources. Under the direction of Annie Ruefle, the school librarian, the students wrote letters to community leaders inviting them to their presentation assembly. We at Columbus Landmarks were honored to be on the guest list and we cherished the carefully handwritten, descriptive letters we each received from a student to experience this legendary project at their assembly. We  applaud the team for their hard work on this impressive collaboration, and for embracing the architectural heritage of Columbus. We thank the teachers for fostering a passion for the city. We are impressed with the knowledge the students acquired and we encourage them to continue to observe and appreciate the details, as Paul Young would instruct.