And The Winner Is … 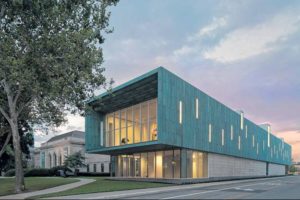 Congratulations to the Columbus Museum of Art, winner of the 2016 James B. Recchie Design Award!

The Award recognized the Margaret M. Walter Wing Addition (2015), designed by DesignGroup, the Beaton Hall and 1931 Museum Building Renovation (2009, 2011), designed by Schooley Caldwell, and the landscaped areas and creative spaces surrounding the museum, designed by MKSK.

“The James B. Recchie Design Award recognizes all types of urban design including the preservation, restoration, rehabilitation or adaptive re-use of historic buildings, additions to historic buildings, new building design, landscape design, and public art. It is rare that one project encompasses all of these categories, and the jury noted that the Columbus Museum of Art restoration and renovation checks all of the boxes,” said Nancy Recchie, Historic Preservation Consultant with Benjamin D. Rickey & Co. and sister of the Award’s namesake. “Not only did it involve all of these elements, but they were done exceptionally well so that the whole ensemble is truly outstanding,” she added.

The James B. Recchie Award honors excellence in urban design that can be reflected in historic or new buildings and places, additions to existing buildings, parks, public spaces and public art. The award celebrates projects that add to the distinctive character and improved quality of life of Columbus and the designers responsible for them. Following a public nomination process, four finalists were selected by a screening committee. Jurors then determined the winner after visiting the five finalists. The 2016 jurors were Lavea Brachman, Co-Founder and former Executive Director of the Greater Ohio Policy Center; Curtis Moody, FAIA, President and CEO of Moody Nolan; and Carole Olshavsky, FAIA, Vice President of Program Management, The Pizzuti Companies.

The 2016 James B. Recchie Design Award Nominations were announced earlier today. These prestigious awards honor excellence in urban design. I have more than a small bone to pick with this year’s slate. I share this knowing full well that my thoughts could antagonize some of the people, firms and institutions I value greatly.

The Columbus Museum of Art is the standout project of this group – at least as relates to the Recchie Award. It is both appropriate to and alters the context of its neighborhood. Institutionally and architecturally, this is a project of major significance – and a successful one at that.

The Julian Apartments is a more than pleasant re-imagining of a building that exemplifies the history of Downtown Columbus. First as a factory during the boom at the end of the nineteenth century, then as a sad blank-faced warehouse, now as a modern residence at the heart of Downtown’s 21st Century Renaissance.

Christo Rey Columbus High School’s nomination confuses me more than a little as it does nothing to affect a change to the urban landscape. It was a school and it remains a school. An honorable renovation/restoration, but I just don’t get how this can be considered excellence in urban design.

Nationwide Children’s Hospital. Huh? Like or dislike the building, it and the entire campus now under construction have nothing to do with urban design excellence. The whole thing would probably make more design sense dropped down next to a cloverleaf on an interstate than it does looming over residential historic districts. This is neither good nor bad urban design – it simply isn’t as much urban design as it is urban renewal – that much-beloved phrase of half a century ago. This complex is eerily reminiscent of its namesake’s construction of One Nationwide and its surrounding buildings that caused literally hundreds of structures to be bulldozed. Though Nationwide Children’s Hospital resulted in the demolition of only a handful of nineteenth-century homes, it and One Nationwide share an irrelevance to their urban context. Before I get tarred and feathered for chastising two of my adopted home’s core institutions, let me say that the business decisions that lead to both projects were in all likelihood sound for both the institutions and greatly benefited the broader Columbus community – they just weren’t good urban design, which is what the Recchie Awards are for. Right?

Thank you for your comments on the finalists for the 2016 James B. Recchie Design Award. We take the selection of finalists very seriously, so I am happy to share some of the Screening Committee’s rationale with you. You agree with the first two nominees but have expressed some issues with the other two, so those are the ones I will address.

Cristo Rey High School – your comment that it was a school and remains a school is one that we hear often in historic preservation. The story behind the former Deaf School building demonstrates that it is not quite that straightforward. The building was partially demolished in the early 1980s when the main building that stood at the center of what is now the Topiary Park burned. Thanks to Mel Dodge, the director of Recreation and Parks at the time, the property was given to the city. The building underwent a very poorly designed and executed renovation in the early 1980s. While it prevented demolition of the building, it destroyed much of its historic character. The large spaces were subdivided with lowered ceilings, the hallways were infilled, the window replacement was inappropriate, and many of the finishes were compromised. The building was never fully rented and was vacant for a number of years when the Columbus Metropolitan Library started to look at the property almost 10 years ago. At one point, its demolition was considered. Enter Cristo Rey High School, which worked with CML to purchase a portion of the land and the building when CML wanted the property that would connect the park to the library. A careful rehabilitation using historic tax credits removed all of the 1980s infill and adapted a 19th century school building into a state of the art 20th century school. This was accomplished with high quality materials, preservation of existing historic fabric, and a program that met the needs of a school that caters to a low-moderate income school population. The creation of an accessible entrance and integration of technology were creatively handled. The property is now connected to the park and the students activate the park (they have phys ed classes there, and they play soccer after school) in a way that it was not activated before the school was there. The Screening Committee reacted to the quality of the design, execution and detail, and that fact that it met human needs of providing an inspiring and dignified setting for the education of high school students from across the city.
Nationwide Childrens Hospital has made a major commitment to its urban location. It is certainly changing the scale of the corner of Parsons and Livingston Avenue, but it is a building that has been thoughtfully designed from the standpoint of its young patients and their families. The building is large, as most new hospitals are, but it is filled with daylight; has a level of detail in everything from the lobby, to play areas, to patient’s rooms that recognize that a child-centered patient experience is different from other types of hospitals. The landscape design along Livingston Avenue, allows for patients and their families to be outside when they are able and to relieve the stress of the hospital experience. An area of the park along Livingston Avenue has a nightly light show that children are able to see from their rooms. The design award criteria does include “responsiveness to human needs.” The Screening Committee was impressed with the level of concern for the young patient in every area of the hospital. I have to admit, I didn’t know what to think when I first saw the nomination, but the interior and the thoughtfulness of the design process are significant.
I hope this provides some insight into what the Screening Committee discussed. Now, we have the Jury who will make the final decision.

Thanks for your thoughtful reply. While I will have to take a fresh look at Christo Rey, I remain skeptical. I remain convinced that Childrens Hospital would be a poor choice for a Recchie Award.